back
to top
Home » Healthy Living

How YOU Can Run a Marathon – No Kidding!

Guest Blogger: My Dad! He says if he can run a marathon at age 60, anyone can. Read on to find out his tips and tricks to preparing for a marathon. 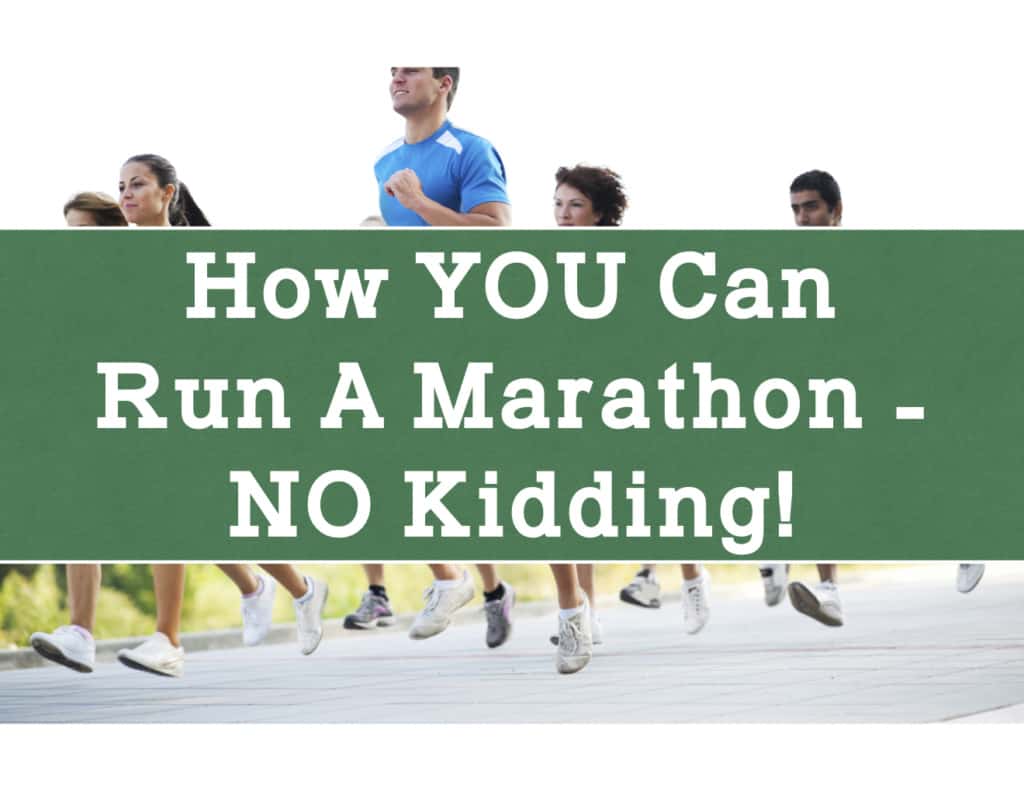 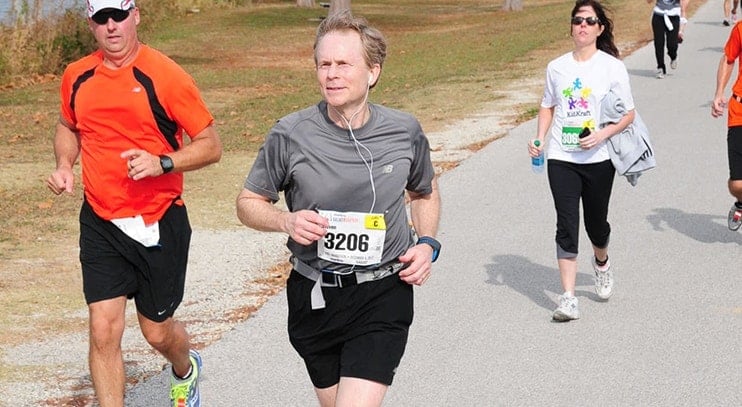 How YOU Can Run a Marathon – No Kidding

Have you ever thought that it would be cool to be able to run a marathon?  If so, then there is a good chance that you can do it, and a lot sooner than you probably think. I am still amazed that I managed to run my first marathon in the month when I turned 60, and I never could have done it without a few lucky discoveries. Let me tell you about my three key discoveries that enabled me to go from non-runner to marathoner…

Discovery Number 1:   A marathon is truly within reach for almost anyone who is inclined to do it.

This wasn’t actually the first of my lucky finds, but it was the most exciting, so I’m putting it first. When I was 59, I happened to catch a Nova documentary called “Marathon Challenge,” and I was astounded by what I saw. The producers teamed up with a professor and a coach from Tufts University, plus a champion marathon runner, to find out if they could train average sedentary people in nine months to complete the Boston Marathon. They selected a dozen volunteers who had the dream but no athletic habits and no idea how to make the dream a reality. The candidates included overweight people, smokers, a heart-attack survivor, a cancer survivor, a man with HIV, a 60-year old woman, and an executive with no time to train.  All 12 not only started the marathon, but finished!

Because of the documentary, I began thinking that running a marathon right after turning 60 might be a grand way to take the sting out of that particular milestone. And incredibly, I found myself suspecting that I could actually do it. About five months later, I found out that I was right on both counts. Not only was there no sting; I was downright proud and happy to turn 60. Although difficult and sometimes painful, every mile of my marathon was a wondrous, joyful celebration of life. 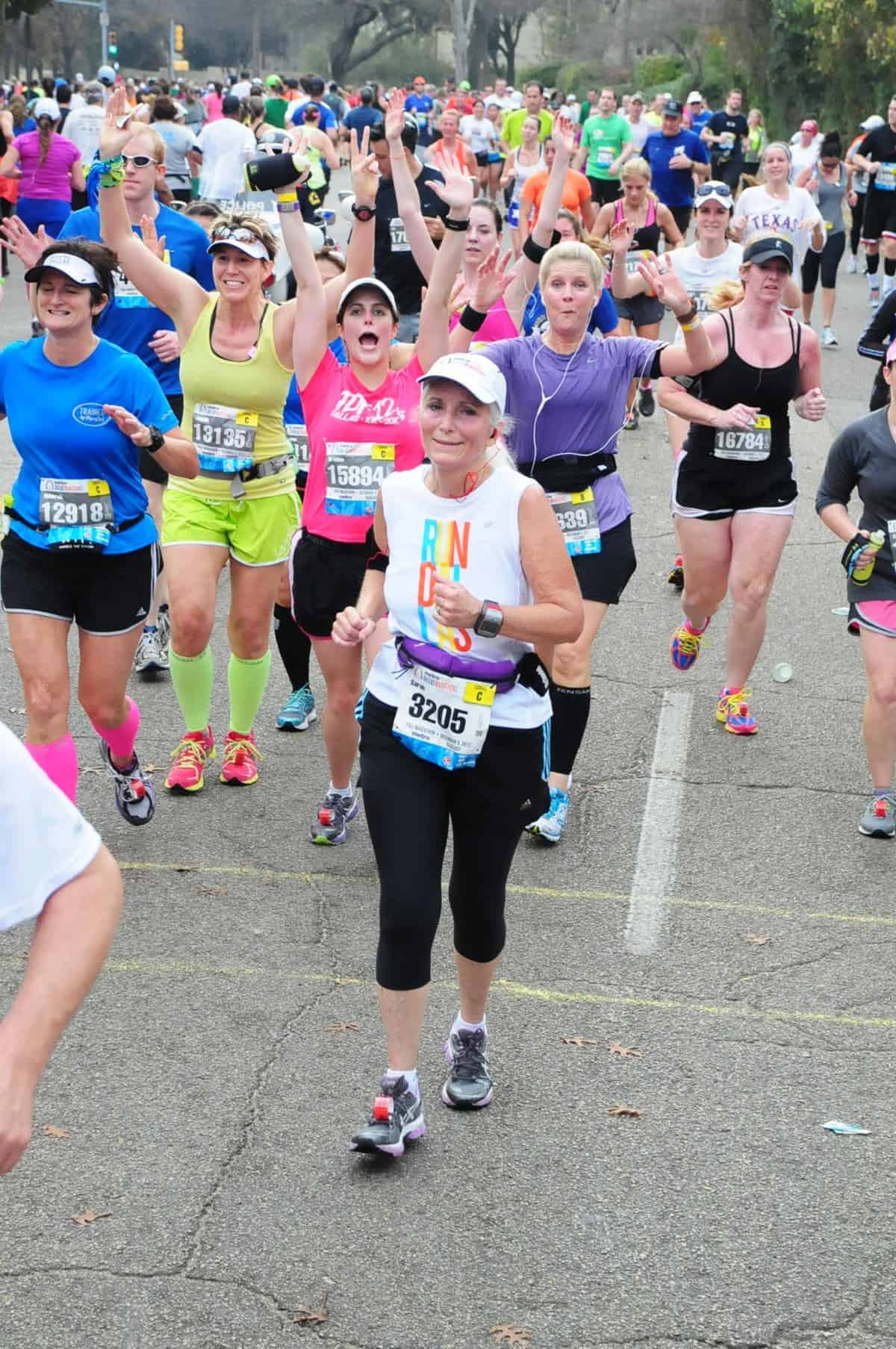 My wife, Sally. She ran her first half marathon when I did my first marathon. Later that year, we ran a marathon together.

So how do you find the time to train for a marathon?  Well, there are just 3 short weekday runs required, and one long run on the weekend, so only a few sacrifices are needed. Maybe running sounds more fun than doing the crossword or watching the news or eating a more leisurely breakfast. Or maybe the kids can start making their own lunches! Before you know it, you’re increasing your distance, the breathing gets easier, and you find yourself finishing your first five-miler. And and then your first 10-miler!  When you finish a 15-miler, you really start to believe that this dream will come true.

I first got the running bug in my late twenties, and for about six months I ran in a 10k race almost every weekend… until my knees said, “No more!” For the next quarter century, I occasionally tried to run again, but the knee pain would come back with a vengeance after just a half mile. I never did have knee surgery, so how did I ever finish a marathon pain-free???

First, I started walking on a treadmill, and then jogging very slowly on the treadmill, trying to use a quiet gliding running style, rather than the loud pounding style that you often see & hear at the gym. I started with short runs, and experienced no knee pain. So I steadily increased the distance. And to my delight, there was still no knee pain as I got up to 2-mile runs on the machine. The running belt had just a little give when pressed down, and this cushioning effect was just what I needed to be able to build up running endurance without hurting my knees. (Plus, running shoe technology had made tremendous advances in my 25 years off.)

So now that I had the knee strength built up, I signed up for a 5K race. But when I started running on the street to finalize my race preparations, that dang pain came right back. That’s when my wife Sally stepped in and saved my entire future running career. I told her that I had paid my entrance fee and was really looked forward to the race, so I was going to go walk the whole thing. She said, “Well, if you’re walking it, I’ll join you.” We went to the event, and started our long walk. We soon noticed that some of the runners around us were barely going any faster than we were, so we switched from walking to a very, very slow shuffling run like others were doing. No hard breathing; we talked the whole time. And suddenly, there was the finish line. What a revelation for both of us! Sally had NEVER done any distance running, and she had just “run” 3 miles. And I did it with no knee pain. Eureka!

We were so jazzed about our new-found ability that we signed up for more 5K’s. We did our practice runs together on the street, at her very relaxed speed, and that was the real key for me to build up joint strength without pain nor injury: Speed = Injury. If your joints and muscles haven’t been fully acclimated to the stress, simply start slowly and very gradually increase your pace. Our mile pace went from 18 minutes to 16 minutes, then 14, 13, 12 – where it stayed for a while. Each stage was fine with us; improvement came without any striving on our part. 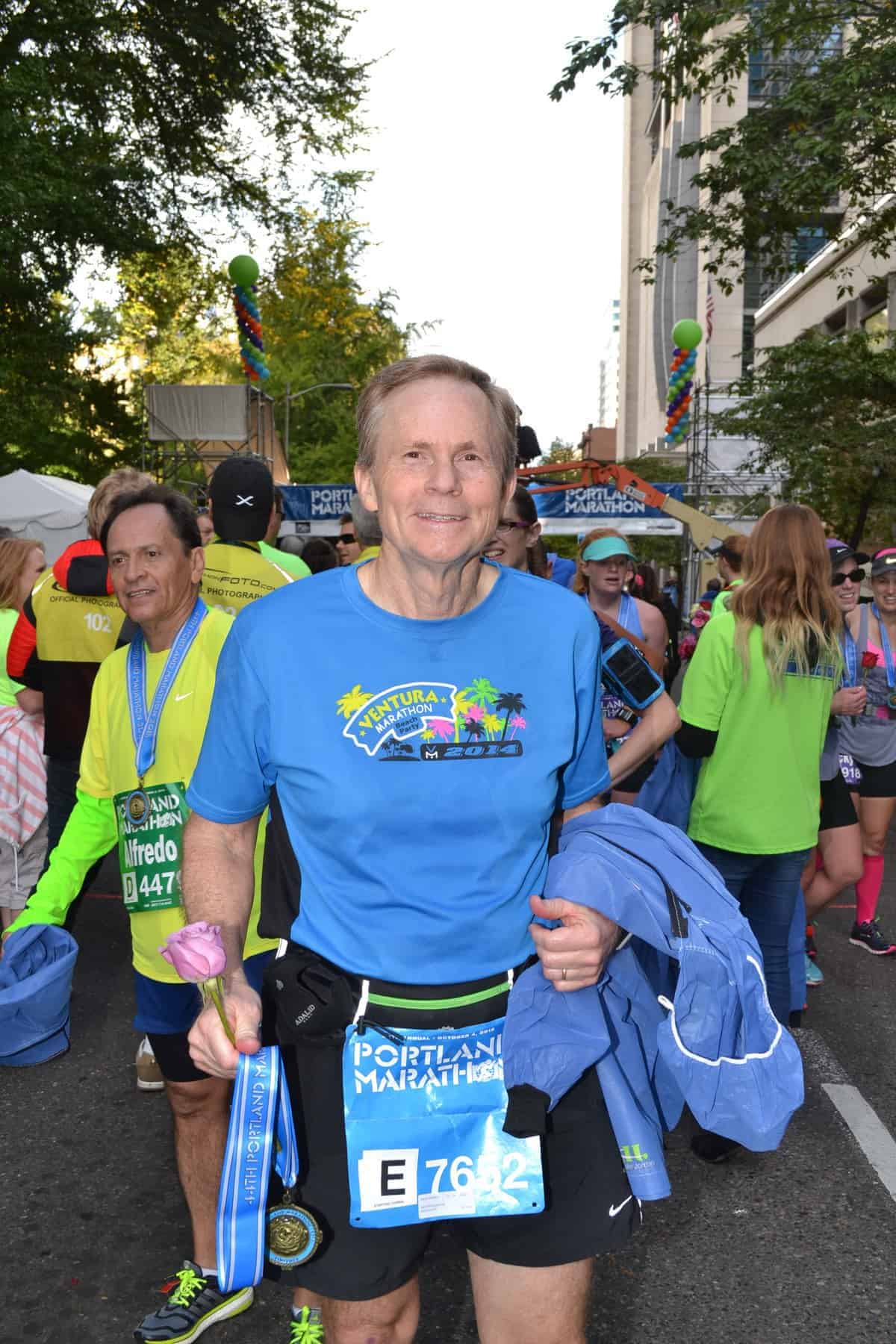 This was taken at the Portland Marathon.

In those first few years of running in our early fifties, we both had some knee injuries that would sideline us for a few months, and then have us running with braces on our knees. But this is where, once again, Sally stepped in and saved my entire future running career. After she retired from teaching at age 55, she pursued a new career as a massage therapist. She then taught me about a little bit of magic she had learned that can reduce or eliminate knee pain in a few moments, without even touching the knee, and prevent the underlying issue from resulting in actual damage to the knee. I don’t usually believe in magic, but she made me a believer! The issue is “trigger points” in the muscles – not in the joints, ligaments or tendons. The muscles are comprised of many strands that are layered and woven together. When some strands become especially strained during exercise, they will tighten up and stay in a contracted, tense state. Often, you will not even feel it in the muscle. Instead, you will feel pain in some part of the knee or heel, which is being pulled sideways or twisted by the tight band of muscle. A massage therapist can find the tight area (the trigger point) and get it to release by simply pressing hard on it for a while. Oh, then it hurts! In fact, that is how you know you found the trigger point – it really hurts to press on it.

You can do this for yourself without a therapist. Press and hold your thumb on a few different places on your thighs and calves, especially where the muscle is likely to affect the part of the knee that is painful. It may be painful in some spots but not at all in others. Those painful spots are the trigger points; press them for 20 to 30 seconds. And this is important: you can prevent trigger points from forming or getting severe. Get a sports roller tube such as the GoFit Massage Roller. Set it on the floor and roll all your leg muscles over it before each run to iron out the trigger points. I do this coupled with traditional stretching exercises.

A few final reflections and pointers…

My parents steadily lost mobility in their eighties. It has caused me to envision a different future for myself: still running, and finally winning some medals in races when there are fewer and fewer runners in my age group! So I adopted the goal of running two marathons per year. So far, so good; I just completed number seven. And each one has become easier. I did have some knee pain in the first two, but I went on to achieve my goal of a pain-free marathon in the third.

If you want to give running a try, here are a few more pointers…

Do you have any suggestions on the food you should eat while training for a marathon?

I’m feeling inspired to try a marathon soon. It’s been on my bucket list, and this has really helped motivate!!