back
to top
Home » Uncategorized

Food and Fitness Tales from the Second Trimester with Twins!

What a difference 15 weeks makes! Geez… the human body is just amazing, and I’ve never appreciated mine more than I have over this past trimester.

If you missed the post about my first trimester, you can catch that here. At the end of that post, I mentioned that I had heard from many other women that the second trimester is the easiest and most comfortable of the three. And I have to say; it certainly started out that way…

Through weeks 13 and 14, I continued to deal with the evening nausea, low energy, strong cravings and food aversions that I felt through most of the first trimester. I honestly suspected that I would just be one of those people who experienced those symptoms throughout the entire pregnancy! After all, my mom did, and they say that many women tend to take after their mothers when it comes to this sort of thing. But then, as the 15th week rolled around, almost all of those feelings magically went away.

This was a huge relief to me. Feeling required to eat quesadillas and grilled cheese on a daily basis was, (admittedly), fun while it lasted, but now I felt like I could finally start focusing on eating high quality foods to help create the healthiest little baby boys possible. I took the advice from both my doctor and a book on pregnancy with multiples that I read and made it a goal to gain just the right amount of weight during this pregnancy, which averaged out to 4 to 6 lbs. a month for a person of my pre-pregnancy size. I was curious and anxious to know if I could actually pull it off, especially after the “you have no control over your hunger or cravings” spell that I was under during the first trimester. So, I made a deal with myself that I would just do my best and not beat myself up if I went over the recommended weight gain. 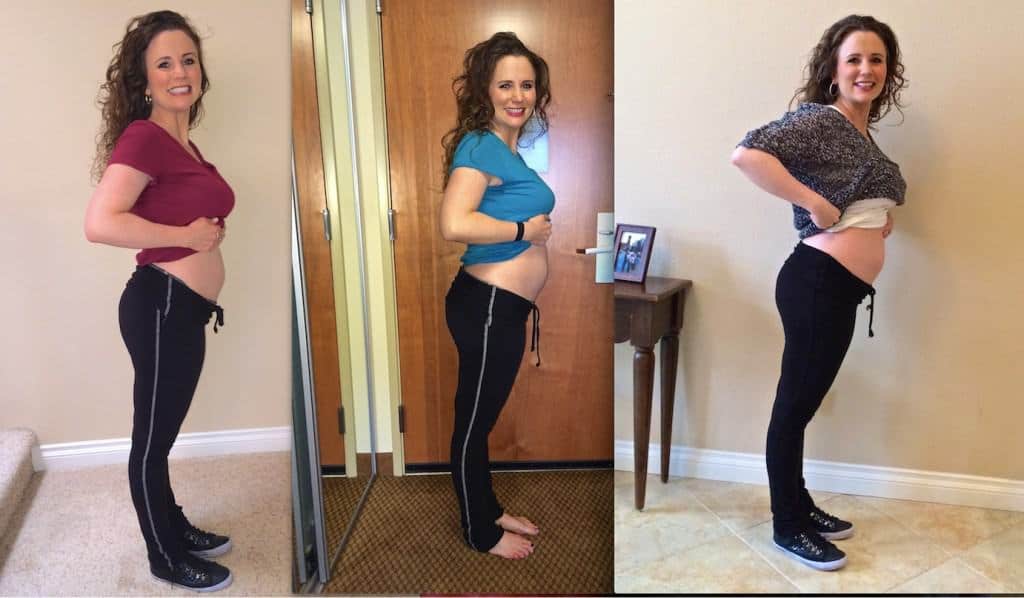 As far as my workouts were concerned, I also made a goal for myself to workout three times a week. I stuck with my usual weight lifting and cardio workouts, except at a much less intense level. But as most women do around 13 – 15 weeks, my belly started to “pop” a bit. 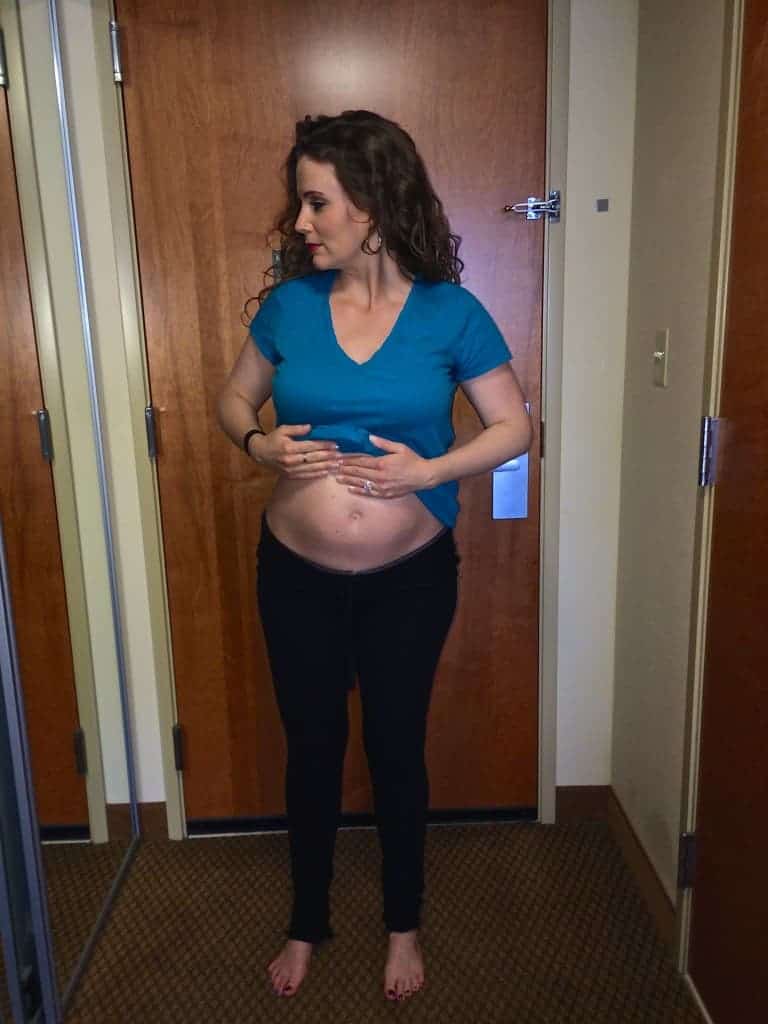 And as exciting as this was, along with it came moments of intense sharp round ligament pains as well as dull pain from uterine stretching. My body was suddenly working really hard to make room for the little ones to be, which was only natural, but there were times that this pain was so intense that if I were at home when I experienced it, I usually stopped what I was doing and laid down for a several minutes until it completely went away. Regardless of this preggo woman craziness, I was still able to meet my workout goal for most weeks. 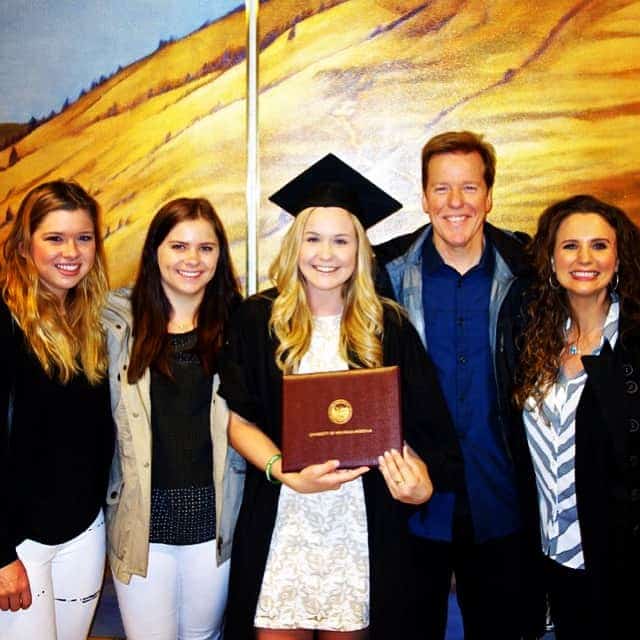 In Missoula, Montana for Bree and her boyfriend, Eric’s, college graduation. I was 14 weeks along on this day.

At about the 16-week mark, swelling of the hands and feet started. I knew this was a common symptom for most pregnant ladies, but I really didn’t think I’d be experiencing it this early on! Alas, by the time I hit 17 weeks, I took my wedding ring off in fear that it would eventually need to be cut off if I didn’t. Luckily, I had another slightly larger ring that I wore on the middle finger of my right hand available. Jeff and the girls gave me this ring for Christmas, so it was the perfect candidate to temporarily take my wedding ring’s place! Not long after, I realized that the more time spent taking it easy with my feet up, the less swelling I endured.

Week 18 was especially magical because I started to feel those two little babies move around inside me. In the beginning, it just felt like little flicks and twitches, but regardless of how slight it was, everything changed for me at this time. It all started to feel so real, and I was overwhelmed by the love, attachment and need to protect those two little fetuses that were growing bigger by the day.

Everything seemed to be smooth sailing for a while there. I remember thinking to myself, “Yep, the second trimester is WAY easier than the first one.” My feet got sore really easily and I found myself needing to sit down more often than I used to, but that was about it. 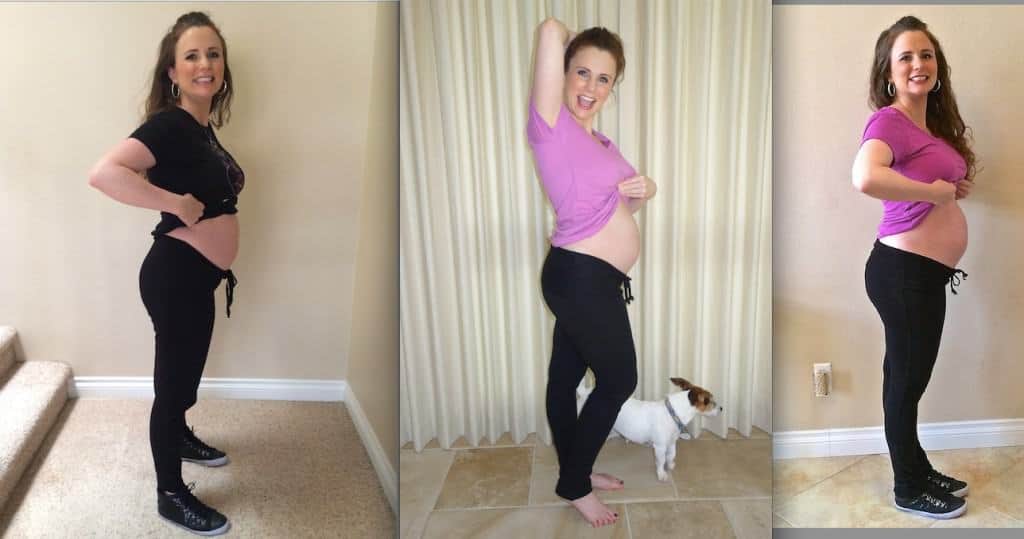 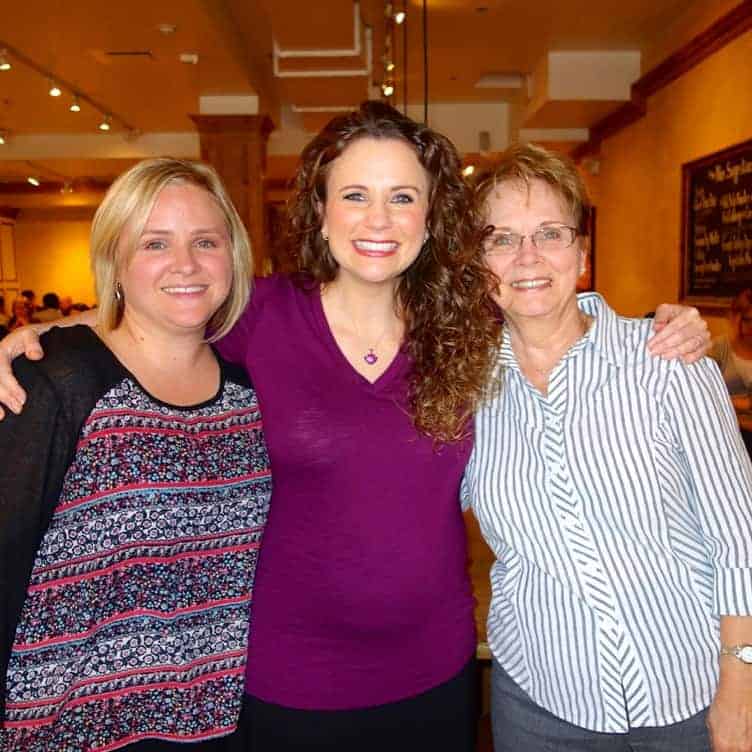 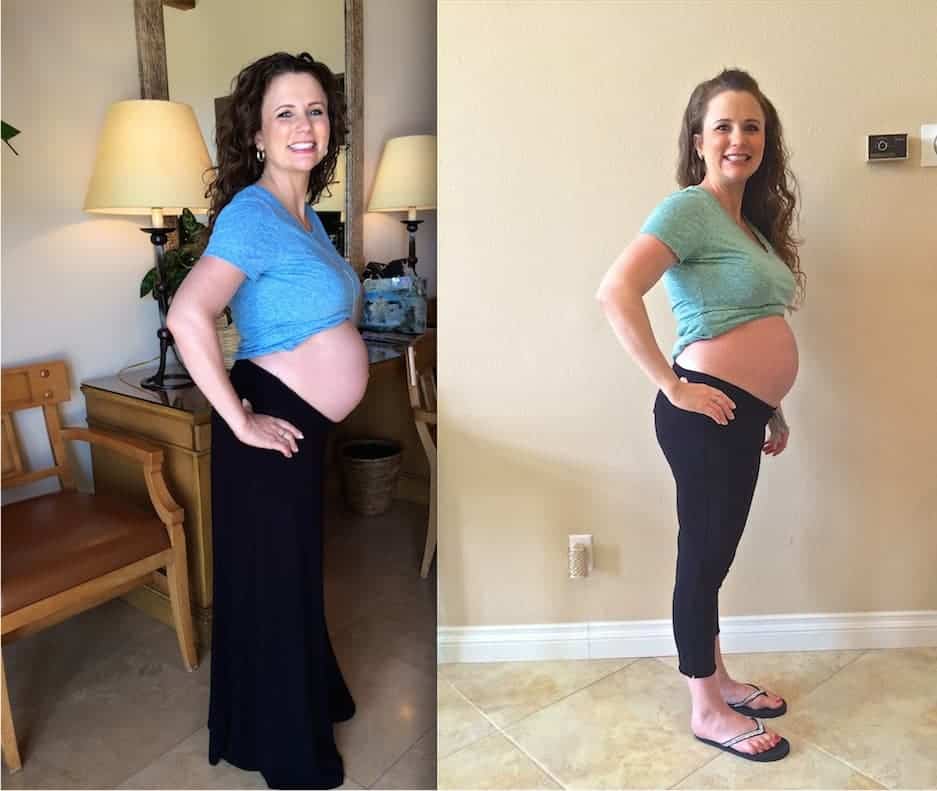 But then, the 21-week mark hit and I started feeling a symptom that I never saw coming. 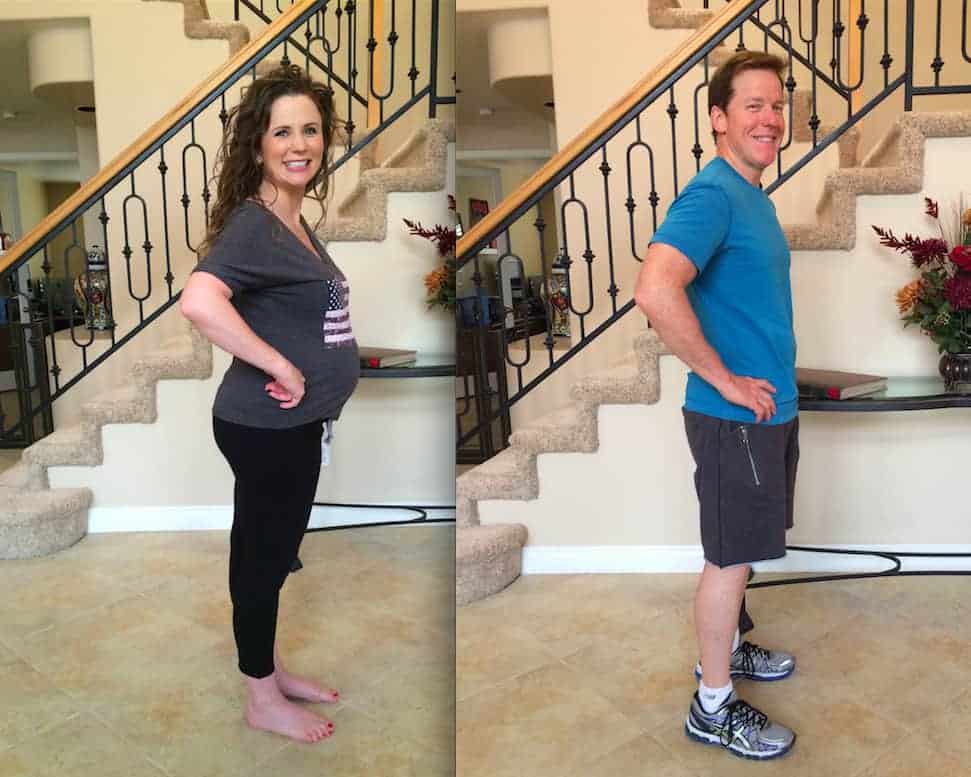 I woke up the day after the 4th of July holiday with some back pain. But not the typical lower back pain that most preggo women experience. Instead, it was just on the right side, right in middle. Then I noticed that the same area accept in the front wasn’t feeling awesome either; I was experiencing some weird tingling and soreness in the front ribs just below my bra strap on that side. And no matter what position I sat or stood in, I couldn’t get these pains to go away. I only found relief when I laid down flat on my back.

The pain became debilitating, and I grew obsessed with finding a way to make it go away or at least feel a little better.

Over the following two weeks, I tried everything: prenatal massage, Rolfing, acupuncture, prenatal yoga, lots of stretching, Tylenol, hot compress, cold compress, Icy Hot and I went to the chiropractor recommended by my doctor. I felt great immediately after trying some of these things, but the pain always came back within about an hour. Sitting and driving were by far the most uncomfortable and painful activities for me. 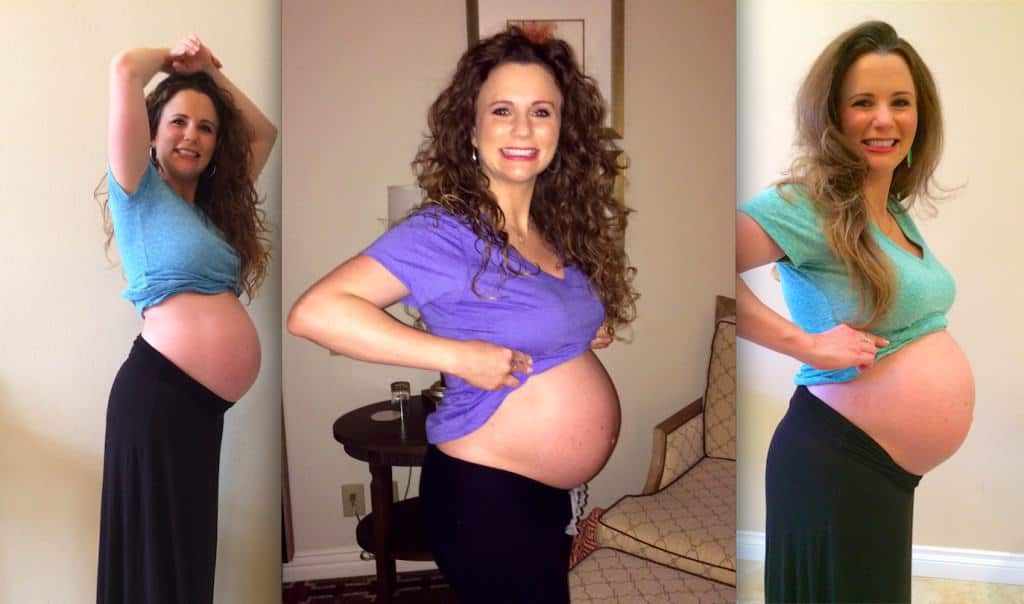 So what did I do next? I did what most people do when they’re desperate for answers; I jumped online and Googled away. As it turns out, I wasn’t the only one experiencing these exact same aches and pains. Which I must confess, actually made me feel quite relieved!

After talking to many health care professionals, this is what seems to be the issue: quite simply, my front ribs on the right side are being pushed out so far by my uterus and those two little boys that it’s causing two of the ribs to pinch the nerves in between them. The back ribs don’t seem to be pinching nerves, but they are being stretched, which is what’s causing the back pain. 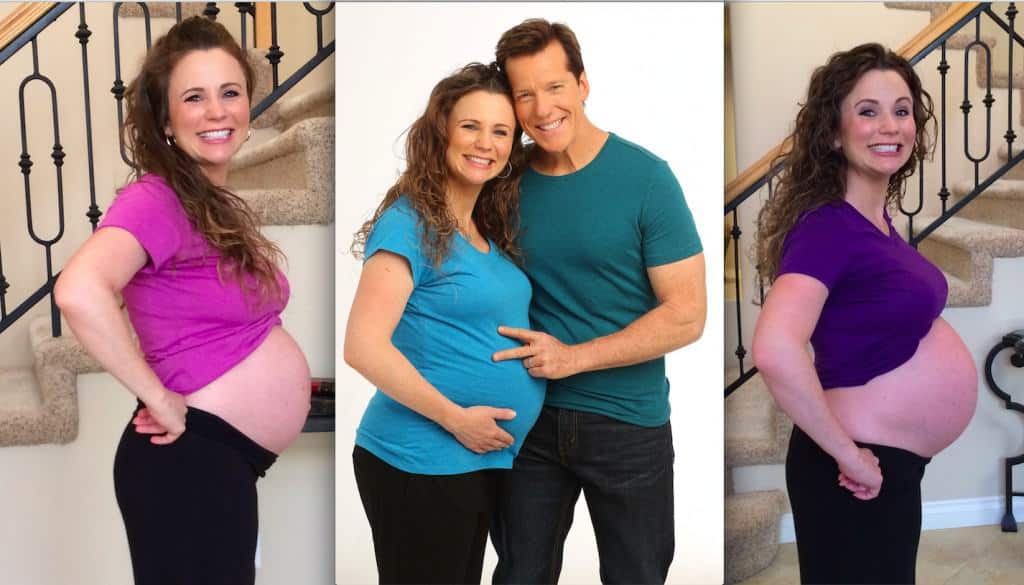 As one week went by after another, I eventually came to terms with the fact that it’s likely that I’ll be dealing with this tremendous pain for the remainder of the pregnancy. I found that if I went out of my way to lie down for at least two – one hour periods throughout the day, and then most of the evening hours, that I could get by without feeling too miserable. 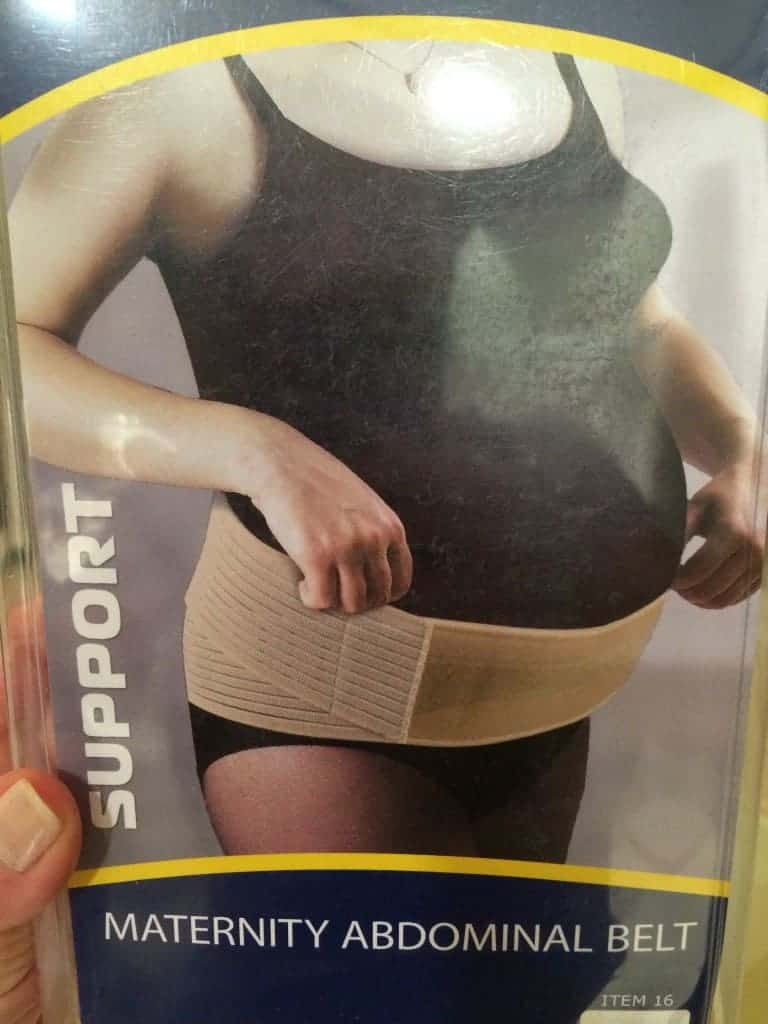 But instead, I wore it up above the belly. 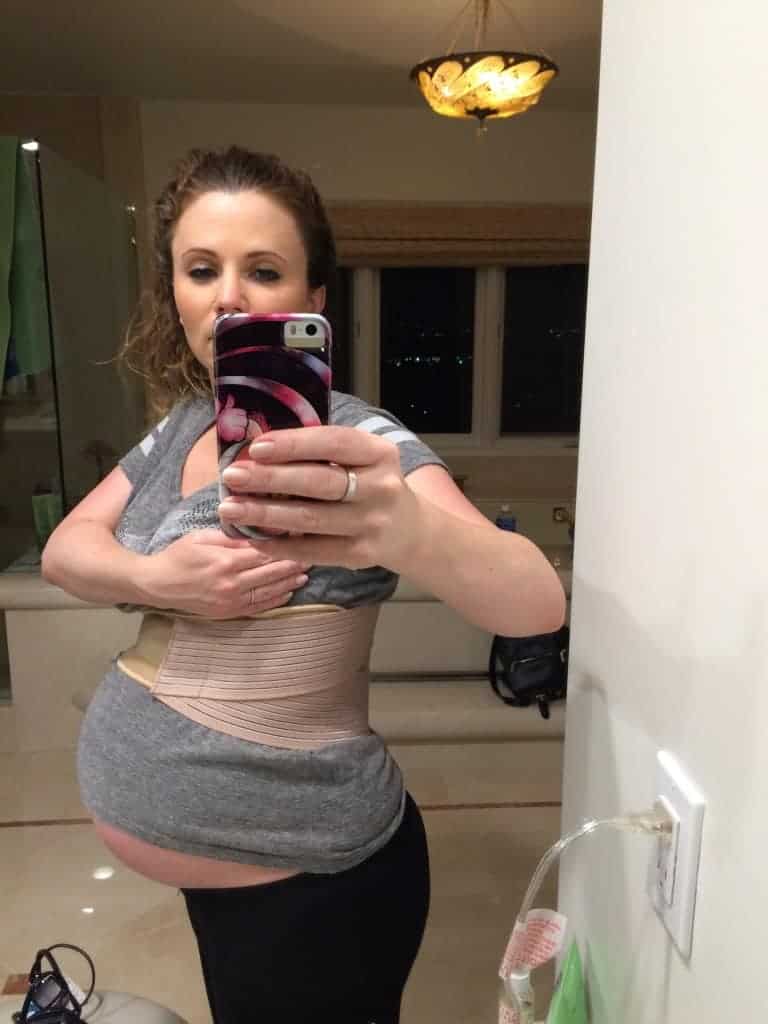 This seemed to especially help with the front rib pain. And don’t worry; I usually wore it underneath my clothes in order to avoid the “Bubba J” look you see here!

Needless to say, my workout routine changed at week 21. From that point forward, swimming ( link to swimming post? )became my number one source of exercise. All aches and pains went away while in the water and I really grew to love it! I found myself in the pool swimming laps about three times a week for 20 – 30 minutes at a time, with the last five minutes or so spent just floating, which is great for stress relief and calming the mind. 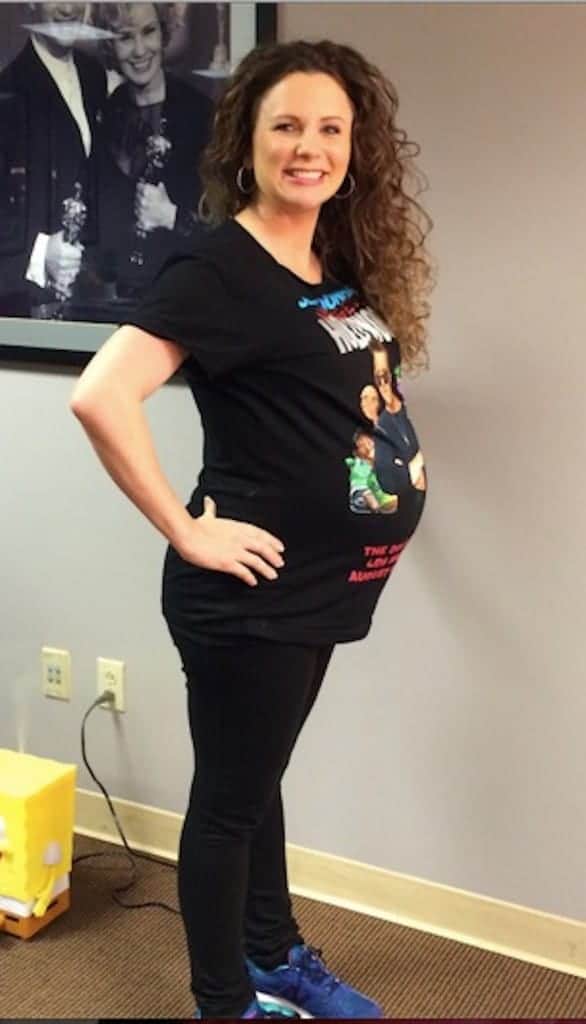 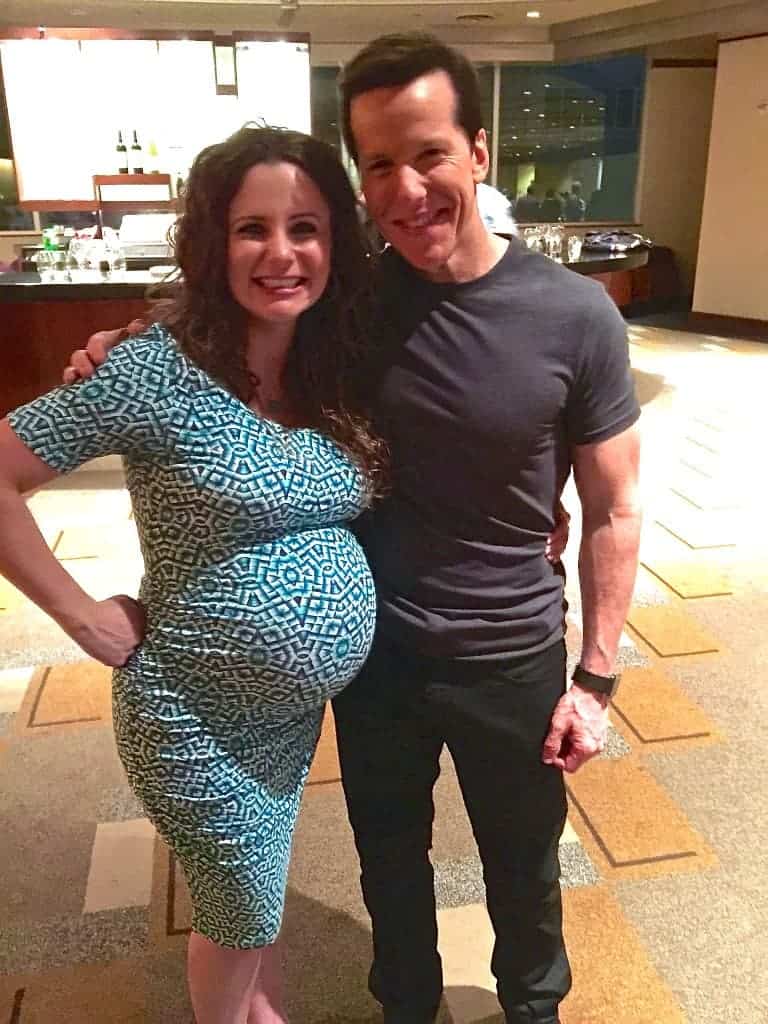 Jeff and I after the taping of his new special, “Unhinged in Hollywood”.

As you might imagine, my vote for the easiest trimester thus far goes to trimester number one! But what’s most important above all, is that these babies look to be very healthy and developing well, according to the ultrasounds and blood tests. Which makes all of the rib pain in the world 100% completely worth it.

Tagged with: health, My World, Pregnancy, The Twins

Absolutely love the week by week pics- my cousin did the same thing.

Such sweet shots of you and Jeff…the anticipation is killing me!!

You seem to be doing great. I am not a multiple but they run in my family so I have seen my fair share of cousins go through the period. And they all say the same thing. It’s worth it when you hold that tiny person in your arms at the end of it. Love the blogs (you made me buy a smoothie maker fyi!) Please keep it up!

I only gained 15pds with my first and 13pds with my second but I also had hyperemesis gravidia which did not help. Like you though Audrey I also exercised and did some light running to stay in shape. My job with my first was very physical as I worked as a punch press operator so I loaded huge coils of steal into presses and punched out parts for Ford and GM. I worked as a quality control specialist with my second pregnancy but I was still active. I can say that with keeping active and being fit during both pregnancies I did not suffer from the inevitable tummy issues that some women have to deal with and with both my pregnancies I never looked pregnant because my abs held my munchkins in. My girls weighed 7pds 9 ozs and 7pds 10ozs and both were over 20 inches long. Both were born c-section, my oldest because she was in distress due to me not dilating past 4 and my littlest because I felt it was the safest option for both her and I. I am happy that you have been able to keep your exercise routine going and that you still eat healthy and I wish you a safe birth and healthy twins!

I am a mom of twins & just love reading your pregnancy & health blogs. Although, my babies are 11, you never forget what you go through to bring healthy babies into your world. I wish you & Jeff much success together as parents & hope motherhood is all you imagine it will be & MORE!!! All The Best??

Your feet swell during running, as much as a full shoe size.

Plantar fasciitis can be treated with rest, orthotics, anti-inflammatory medications, steroid injections and sometimes surgery.
If you don’t know the cause of a pain, tap on the image of that pain and you’ll
probably get a measure of relief. 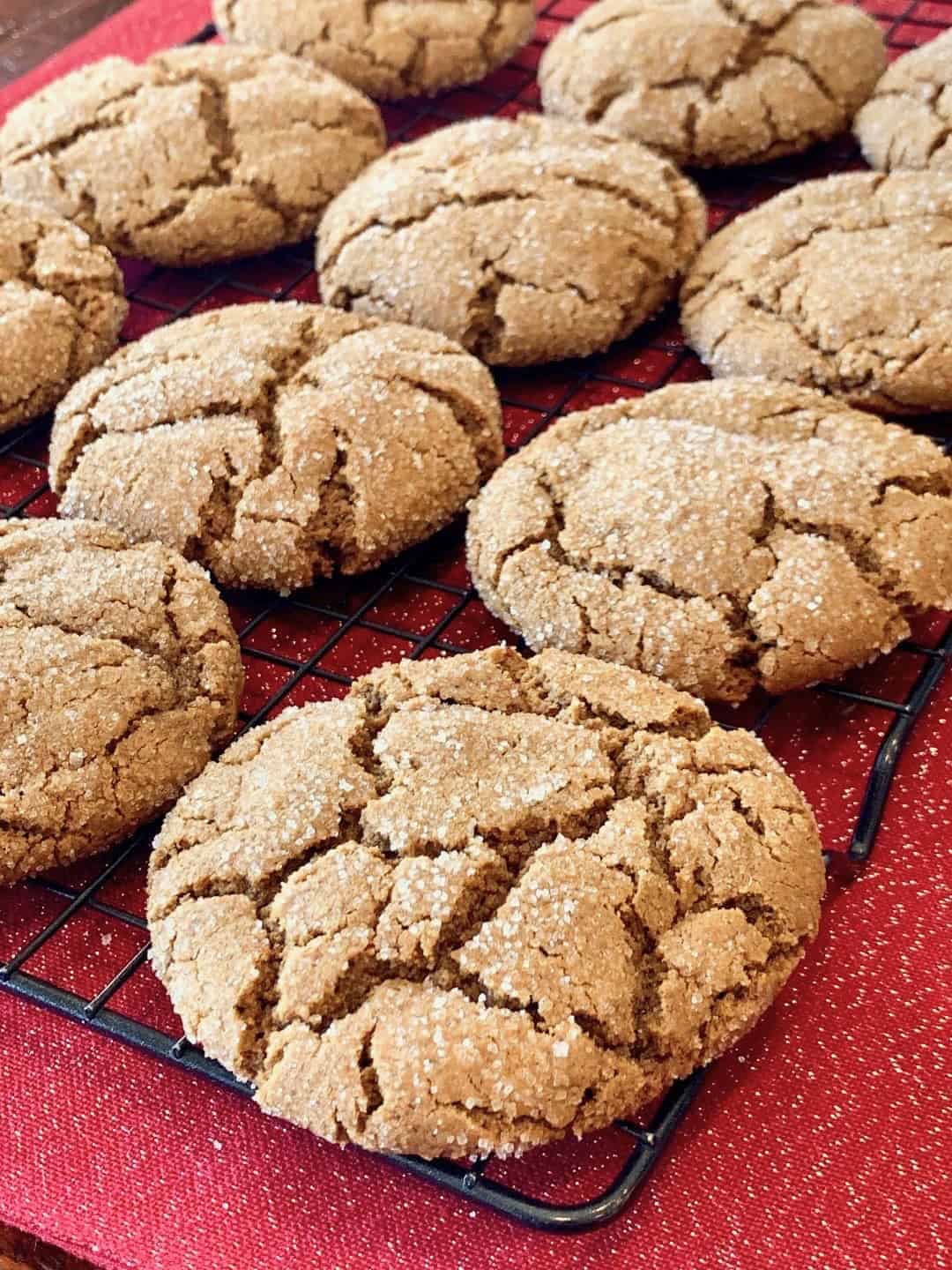