back
to top
Home » Uncategorized

The Honest Truth About My Eating and Exercise Habits During My First Trimester With Twins!

It’s interesting what two tiny little embryos can do to a girl’s body and overall existence! Boy oh boy, did these little guys make their presence known from the moment they decided to stick around.

I know each pregnant woman has her own unique experiences—some women have morning sickness, some do not. Some mamas-to-be have strong food cravings while others can’t stand the thought of most foods. And some ladies have the energy and desire to get some exercise in, while others laugh at the very thought of it. In most cases, though, I hear the first trimester is the toughest, and so far I would have to agree with that.

We found out I was pregnant with TWINS the day before April Fools Day! But since we’ve had some false alarms and sad experiences in the past, we decided not to share the news with anyone just yet. Too bad, because we sure could’ve had some fun with it on April Fools Day!

Right away, my very first symptom was complete and utter exhaustion. Every day by 3:00pm my body demanded a nap. If it weren’t for the sunlight and the million ways to see what time it was, I would’ve thought for sure it was 11 at night by the way I felt each afternoon. I am just so incredibly thankful that my life allowed such flexibility at the time to take those naps on most days.

By the time I reached the six-week mark, food started to look and smell differently to me. In fact, most foods I typically ate sounded really gross, especially (get ready for this) cooked vegetables! I couldn’t believe it! How in the world could something that I used to love and eat 2 -3 times a day suddenly sound absolutely repulsive!? But not only could I not stand the thought of eating cooked vegetables, I couldn’t look at pictures of them, and I certainly couldn’t stand the smell them. Instagram suddenly became something I avoided due to all of the foodies and nutrition enthusiasts I followed. They ALL seemed to be posting photos with cooked vegetables in them. I actually remember one day just before Easter, I found myself angry with Martha Stewart for posting a picture of roasted asparagus! (Poor Martha… she didn’t know.) But since I do the cooking for Jeff and me, I actually continued to cook vegetables for Jeff. And oh man—if he ever questioned my love for him, then that should have proved it!! After they were done cooking and I needed to dish them up for Jeff, I stood as far away from the vegetables as possible with my arms stretched out and my head turned to the side as I gagged from the sight and smell. I had every window and door open to lend some relief from their scent, but the odor still managed to permeate every room of the house. How do two tiny, innocent little embryos do this to a person??

I managed to stick to my normal breakfast routine of oatmeal with hemp protein powder, walnuts and berries added, but by mid-morning, all I wanted was bland and salty foods such as toast and crackers, along with tart fruit, such as pineapple and raspberries. But knowing what I know about nutrition, I fought to include foods with protein. Sometimes I succeeded, sometimes I didn’t. Below is an example of what my lunch looked like for a short time there: 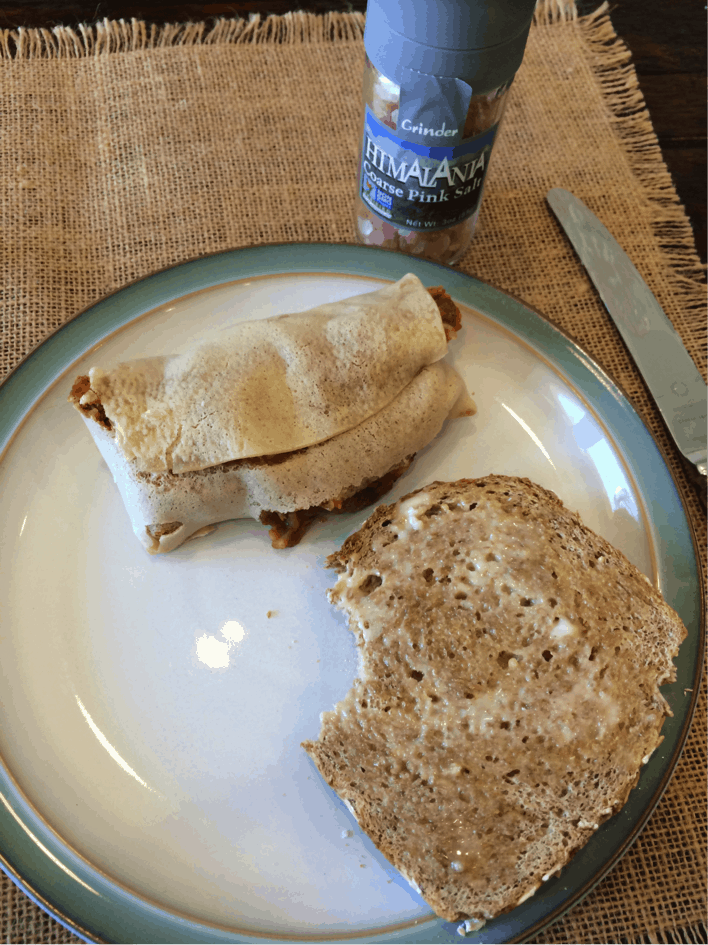 A bean and rice frozen burrito and a piece of toast with Earth Balance spread on it.

By the time the evening hours hit, things really started to go down hill. Instead of experiencing morning sickness, apparently I’m more of an “evening sickness” kind of pregnant girl. This was especially frustrating for me because this was the time I typically sat backstage during Jeff’s shows and worked on writing posts for my blog. This was early April, and I had the goal of launching my site by early May. My thought was to have several blog posts up and ready to go by the time my site went live so that people would have plenty to read right from the start. But one night after another, all I found myself doing backstage was lying lifelessly on a couch while stuffing my face with saltine crackers.  It eventually occurred to me that I needed to switch my writing time to the morning hours. 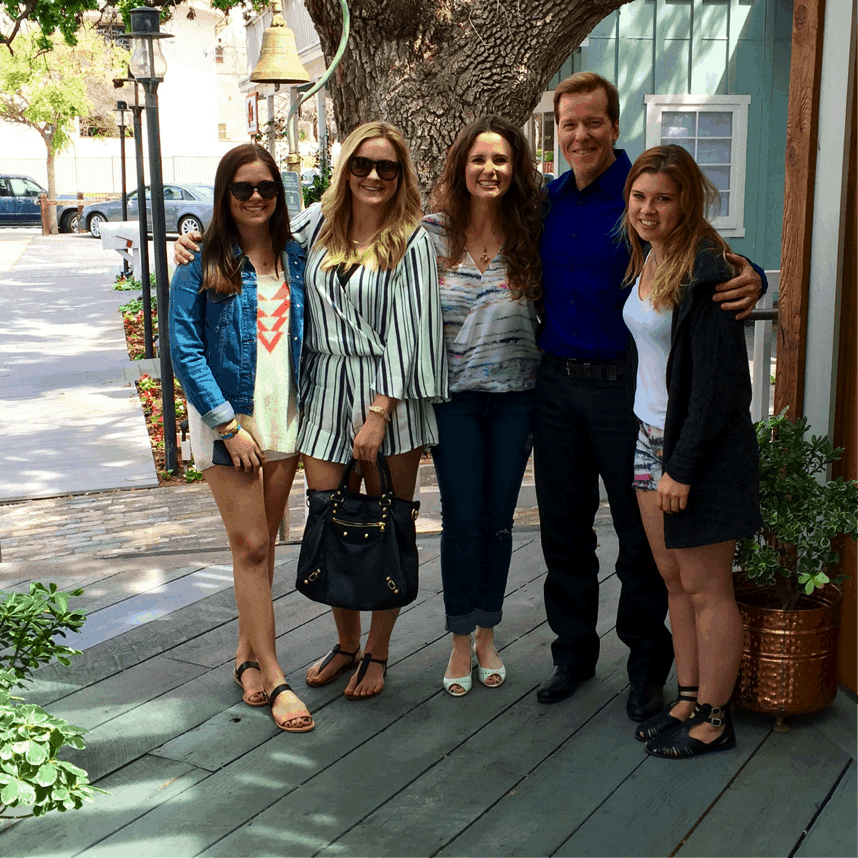 Out to brunch with the girls on Easter Sunday. I was eight weeks pregnant here.

Once I reached the eight-week mark, cravings joined the party. I went from eating a mostly plant-based diet pre-pregnancy, to suddenly absolutely requiring cheese and chicken in my life! Things like cold cheese sandwiches, grilled cheese and chicken tacos were all I wanted. But this was very difficult for me. Although I knew this precious time of pregnancy was a mere nine months of my life, I still wanted to eat nutritious and high quality foods. After all, I had the tremendous responsibility of creating two healthy little humans!  So, I did what I could. I found the healthiest bread I could find…

The healthiest cheese I could find, which was a non-Gmo, grass-fed, organic cheese… 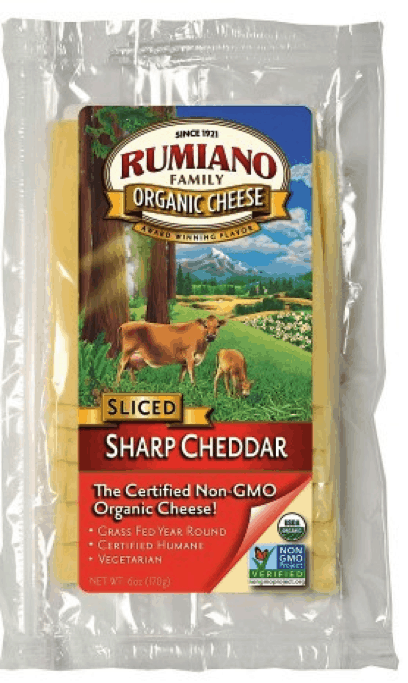 And I did my best to eat one big salad a day, just to get some vegetables in. But this didn’t really start happening until about week 10.

OK, OK… I’d be lying if I said I never had potato chips during all of this, too. Salt + potato = YES PLEASE in my book. So I was very thankful to discover that Kettle made an organic, non-GMO chip, not that this makes it a nutritious food or anything!

ALRIGHT… One more confession… (sigh)… There may have been a small handful of late night visits to Del Taco for one of their cheese quesadillas. (Ugh… Sorry if I disappoint you!) If I didn’t bring enough food with me to the venue each night where Jeff performed, it was almost guaranteed that a stop at Del Taco would happen on the way home. It was such a strange feeling; it was as though I had no choice! My body needed a quesadilla, and boy did it cure any bit of nausea, hunger or heartburn that existed in my body. Meanwhile, Jeff thought it was HILARIOUS. Here I was, the preacher of all things health hitting up the drive-through late at night due to pregnancy cravings. He would’ve told the audience about it each night on stage if I had given the ok! Thankfully, the guy can keep a secret.

The hardest part about all of this was going out to eat with friends and family. No one knew I was pregnant! And since I had earned a reputation for always ordering really healthfully in restaurants, we would sit down at a table with friends, and without even bothering to open the menu, at least one person would say, “I’ll just get whatever you get, Audrey, because I know it’ll be healthy.”  Normally, I’d smile and take it as a compliment.  But as a picky pregnant woman who hated cooked vegetables, I wanted to laugh and start crying all at the same time. I would then usually just order an appetizer such as chicken lettuce wraps or a salad, and then eat the cheese sandwich I had stashed in my purse the moment we left the restaurant. Every once in a while, though, I just had to give in to my cravings no matter who was with me.

Friend: “What are you going to order, Audrey?”

Me: “Oh, I think I’m going to treat myself today by having the margherita pizza.”

Moments later when the food arrived, that friend would sit there astonished as I polished the entire pizza. Needless to say, it was a HUGE relief when we finally started telling people the good news at the 12-week mark!

One thing that made me feel a little better about my eating habits during this time was the fact that I had zero desire to eat sweets, especially chocolate. If I were craving both cake and quesadillas, I would have been an absolute mess!

As for exercise, I managed to get in about one workout a week during the first trimester. I would either do a bit of moderate weight lifting or a 20 – 30 minute cardio session. Sometimes both. But Jeff and I did go for walks a couple days a week, which was a nice and easy way to get the blood flowing, as well.

So there you have it—the honest-to-goodness truth about my eating and exercise habits during the first trimester! I know it wasn’t pretty, but I’m only human, after all. Wait… Correction: I’m only a human carrying two tiny humans, after all!

Everyone told me that I would start to feel better and have more energy throughout the second trimester. I’ll be sure to report back and let you know if that was truly the case!

Tagged with: My World, Pregnancy, The Twins

I was interested in knowing which bread you found that you felt was healthy. I have been eating Killer Dave’s bread as it seems to have healthy ingredients but am unsure if it is the best I can find. I would love to know your recommendation for this. thank you and really enjoy reading your blog.

Thank you for sharing your delightful human struggle wtih us, Audrey. You are a gem of inspiration for us who struggle daily to control our weight and eat right. I found it interesting to read how you never ate steamed, roasted, or cooked veggitables and couldn’t even tolerate the smell of them. i suffer from migraines, however my second trimester they went away for the rest of my pregnenacy, which was the best part, plus all the energy i had. hang in there! BTW, i’m not yelling (with all caps) for some reason it will not allow me to change the font. you are doing remarkably well, and I look forward to reading more of your journey and the birth of your twin boys! all the best of life! janice

Excited to hear more Audrey! Hope EVERYTHING continues to go smoothly- iM sorry to hear youve run into difficulties before, but now its paid off with your tWo little Boys coming!
Heres to Healthy trimesters and a safe delivery!

congratulations to you, Audrey. Your journal is inspiring.

Thanks for adding this wonderful giggle to my day. Dont beat yourself up to bad, my boss is pregnant and we went from ‘lets have something healthy for lunch ….to i want pancakes now! Rest well, be happy and keep writing…

I just read the news About Your pregnancy! When i wEnt to your instagram page I saw you had a blog so I immediately came over. Congrats to you & Jeff! Pregnancy Does do strange things to our bodies doesnt it. I loved this post!

I love reading all you and Jeff are doing! I have Crohn’s disease and have more things I don’t tolerate than I do. It is hard to get healthy when your body doesn’t absorb nutrients. I have seen numerous nutritionists but they just tell me to count calories.

Many cogtoanulatirns Matt and Hayley. Enjoy every moment of being a parent, it’s worth it – even thought sometimes its exhausting.With our warmest wishes.Helen & John (Keayes)